Social Justice: activism for a just society; the idea, vision and goal of a fair, honest and inclusive system that understands and values human rights, and recognizes the dignity of every human being, in which the distribution of resources is equitable, sustainable and all members are physically and psychologically safe and secure, regardless of their background. It's people acting for utopia (a perfect or at least, a better world) from many different axes of privilege, domination and oppression: 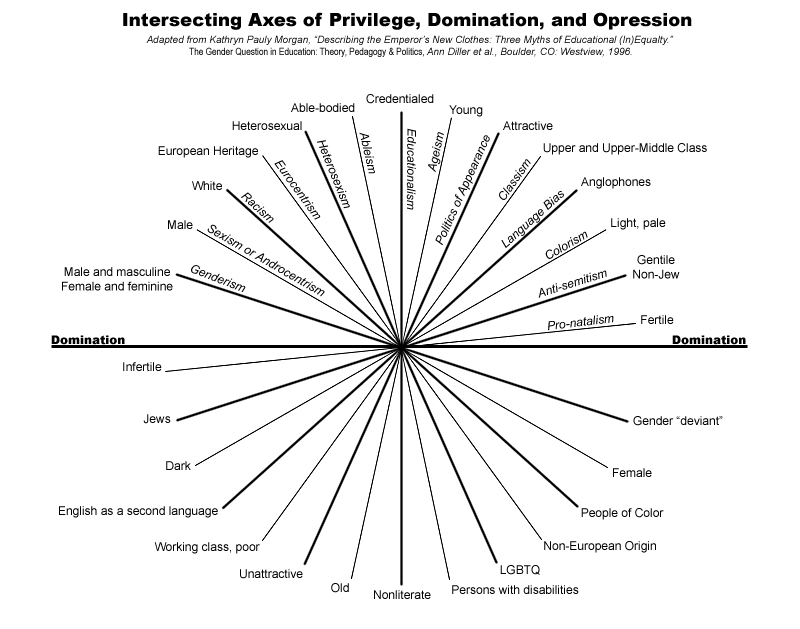 Image taken from: http://wintugo-nasty.tumblr.com/post/20105375513/embiggen-society-recognizes-the-ways-people-are
Intersectionality: a sociological theory and concept used to describe how oppressive institutions and systems (racism, sexism, homophobia, transphobia, ableism, xenophobia, classism, etc.) are interconnected and thus cannot be examined in separation from one another. It enables us to recognize that perceived group membership (of age, height, gender, race, culture, religion, etc.) can make people vulnerable to various forms of bias, prejudice and discrimination, yet because we are always simultaneously members of many groups, our identities are complex and shape the specific way we each personally experience that systematic social oppression. Injustice does not act independently of one another (e.g. not all females feel the same way about sexism) and instead injustice "intersects" in people's multifaceted experiences.

Socialization: the process of learning to exist with other people in your family, community and society. You adopt certain cultural beliefs, behaviour patterns, norms, customs and ideology.

Stratification: the act or process or arranging things and persons into hierarchy, classes or social strata.

Supremacy: the state or condition of being superior to all others in authority, power, or status.

Domination: to have and/or exercise of control or influence over someone or something, or the state of being so controlled

Oppression: the state and pattern of being subjected to prolonged cruel or unjust treatment or control.

Hegemony: political, economic, ideological or cultural power exerted by a dominant group over other groups, regardless of the lack of explicit consent from the latter.

Prejudice: stereotypes and generalizations that colour our perception of other people based on their race, gender, age, size, ability or other intersecting categories. It's an opinion that is preconceived, not based on reason or actual experience and is typically harmful in some manner, regardless of whether the notion is a positive one, such as "all Asians are smart," which implies other races aren't.

Discrimination: when people act on prejudices and say things the other group finds distasteful and unfair.

Privilege: better status, rights, benefits, treatment, opportunities, immunity, grant, monopoly and other advantages you get to have when your perceived group(s) has systematic dominance over another, whether you personally want it or not.

When someone tells you that you have privilege…

It does not mean that:

It does mean that:

Invisibility: the concept of not being seen, not represented or heard at all, just rarely or even misrepresented and being spoken for without your consent or agreement.

Counter-narrative: the story told from the other, or opposing point-of-view. For example, if all girls like pink, then the girl who doesn't like pink is a counter-narrative. This is important when only one kind of story is being told about any marginalized group.

Respect: one’s willingness to understand people's lives, and accept their circumstances, capacities, characteristics, realities and decisions, no matter how much they differ from yours, or if you would never think to act the same (Abdi 2002-2012).

Image taken from The University of Alberta (2002-2012). Diversity, Equity and Respect: http://www.education.ualberta.ca/AboutTheFaculty/~/media/education/Images/Features/Large/diversity_L_feature_735_284.jpg

Diversity: a lot of variety or a wide range of different things. It's in our DNA. In the context of social justice, diversity often refers to the unique ways of being human that are never the same for any two persons or groups of people. It's this dissimilarity that creates drama and yet enriches our lives, assuring collective human achievement (Abdi 2002-2012).

Inclusion: the action or state of including or of being included within a group or structure. For example, a bunch of different vegetables is biodiversity, but inclusion is having them all contribute their flavours in a salad. Having all kinds of people of colour, age and ability, as well as a balanced gender ratio in the work place is diversity, and inclusion is when they all cooperate on a project together.

Equality: the state of being equal; sharing the same value in quantity. People with all their differing circumstances are never equal in status, rights or opportunities.

Equity: the quality of being fair and impartial; this does not necessarily mean giving every person standardised equal treatment as depicted below: 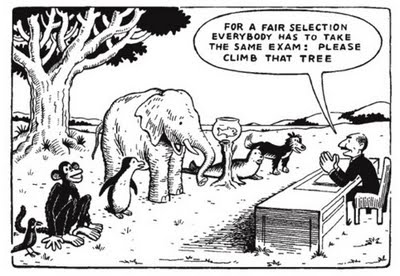 Image source unknown. Please let me know if you know who the cartoonist is.